The event was advertised via social media, invites were sent to journalists to join the event and let the world know how people with disabilities are now able to travel via train. No response. Not even one journalist was interested in providing media coverage for the event. Not even a “thank you for the invitation but I will not be able to make it”. Dead silence from the media.

The day arrived. A group of people with various forms of disability gathered at the agreed meeting point on the main station. A portable ramp was rolled out to enable those in wheelchairs to be wheeled onto the train. Will this ramp be rolled out every time a train arrives or departs during peak hour when people need to get to work or come home from work? I doubt that, but we claim our rail system is ready to accommodate people with disabilities.

The train arrives at it’s destination where one person (with a physical disability who is unable to climb stairs/steps) is waiting to meet this train because all her friends are on this train. She eagerly and excitedly awaits this train after forcing herself to climb three steps at the entrance of the train station to get to her friends. From the entrance of the station she gets to what she thinks is the correct platform for the train to arrive. She waits.

Finally the train arrives, but her excitement quickly turns to disappointment when she is told “you are on platform 1 and the train you are waiting for is on platform 3”. 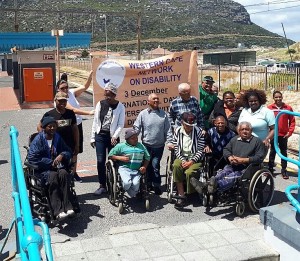 Determined not to have her spirit crushed, she eagerly asks “so how do I get to platform 3?” and is told “via the subway” and is pointed in the right direction. Knowing that going through subways usually involves stairs she asks “so how does a person with a disability get to the other side?”  She is told “sorry ma’am, that’s the only way”. This now means that anybody on that train or who needs to get to that train in a wheelchair, cannot get there. There was no alternative plan. What would have happened if people needed to be evacuated from the station in an emergency?

Still, we are assured that our rail service is accessible to ALL people with disabilities.