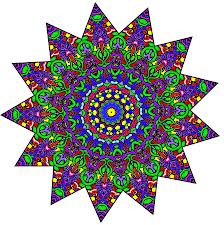 My post this week has been inspired by the Gupta wedding held in South Africa recently. Why? I hear you asking . . .

Well, I noticed from a few photographs I’ve seen that in the area where the wedding reception was held, there was a very colourful Mandala. I’ve seen very colourful mandalas in my lifetime (not knowing that’s what they are called) and seeing one again in these pictures, inspired me to find out more about them – what are they and where do they originate? Is there any symbolism attached to these colourful drawings?

Thanks to my good friend Google and http://www.wikipedia.org I discovered the following:-
• A Mandala is a generic term for any plan, chart or geometric pattern that represents the cosmos metaphysically or symbolically. It is a spiritual and ritual symbol in Hinduism and Buddhism representing the universe. The basic form of most mandalas is a square with four gates containing a circle with a centre point. Each gate is in the general shape of a “T” and often exhibits radial balance.
• Mandalas may be used for focussing as a spiritual teaching tool, for establishing a sacred space and as an aid to meditation and trance induction.

To learn more about Mandalas, I then went to http://www.mandalaproject.org and learnt the following:
• Mandalas represent wholeness, and can be seen as a model for the organisational structure of life itself – a cosmic diagram that reminds us of our relation to the infinite, the world that extends both beyond and within our bodies and our minds.
• Describing both material and non-material realities, the mandala appears in all aspects of life: the celestial circles we call earth, sun and moon as well as conceptual circles of friends, family and community.
• Creating a group mandala is a unifying experience in which people can express themselves individually within a unified structure.
• Creating a group mandala can be an enjoyable activity with friends. It can also provide an excellent closure to an event or workshop.
• Labyrinths are a type of mandala found in many cultures and are used as a tool for centering.
• Carl Jung (a Psychologist) said that a mandala symbolises “a safe refuge of inner reconciliation and wholeness.” It is “a synthesis of distinctive elements in a unified scheme representing the basic nature of existence.” Jung used the mandala for his own personal growth and wrote about his experiences.
• According to Tibetan Buddhists a mandala consists of five “excellencies” viz
– The teacher
– The message
– The audience (viewer)
– The site
– The time

An audience or “viewer” is necessary to create a mandala. Where there is no “you” there is no mandala.

With my keen interest in Psychology and everything that goes with it, I then decided to dig deeper to find out more about what Carl Jung said about Mandalas and this is what he said (http://www.psychologytoday.com/blog/the-healing-arts/201003/cool-art-therapy-intervention-6-mandala-drawing)

• Jung believed this symbol represented the total personality also known as “self”. Jung noted that when a mandala image suddenly turned up in dreams or art, it was usually an indication of movement towards a new self-knowledge. He believed that mandalas denoted a unification of opposites, served as expressions of self, and represented the sum of who we are.
• According to Jung, mandalas have the potential to bring into being something universal within, perhaps even the recognisable typical self, at the same time, they give us an experience of wholeness amid the chaos of everyday life, making the “sacred circle” one of the best art therapy interventions for both soothing the soul and meeting oneself.

Mindfulness – is maintaining attention: focussing. It usually starts with mindfulness of breathing, then expanded to all bodily sensations, bodily aspects of emotions, and thoughts. It is attending without curiosity, without judgement or reactivity, to whatever arises and passes away.

Mandalas are patterns containing minimal information that the logical part of the brain can process.

So the next time you need to enhance your mindfulness, use a mandala to activate the intuitive part of the brain and quieten the logical you.

To find out more about mandalas visit: http://www.evenstarcreations.com